Back in February of 2011, I posted a very rough alpha release of my first WP7 IRC app called dIRCa. I abandoned the project primarily due to the heavy reliance on Homebrew sockets and rewrote it from scratch using the wonderful IrcDotNet library. Not having to handle the core IRC quirks is a godsend and luckily it works rather flawlessly with 7.5+ (Mango and above).

I originally wrote a post back in 2011 to gather emails for the beta submission process but it never got published. I was also working diligently to release a competent v1.0 but my perfectionism got the best of me.

I've since release it as open source on Github. The project is abandoned so far as my HD7 phone is no longer consistently in use now that I've switched to the HTC 8x and Windows Phone 8.

The barriers to make it a Windows Phone 8/WinRT version are pretty high:

The original project received quite a bit of downloads for my first open source project (around 700 by this time) with the reason primarily being that a XAP was already built. On Github there are no releases but I look to remedy that very shortly.

The application is pretty functional but it is rather rough around the edges. For instance, when you first start it you're required to go to the settings screen as exiting initializes and starts the connections to the various networks. I intended this to be covered in a tutorial of sorts but that was something I was going to cover off last.

I chose a cheesy name to spoof on one of my favorite films lately, Team America: World Police. The project likely wouldn't exist if it wasn't for the pioneering efforts of Jeremiah Morrill on the XDA forums. I used the Homebrew project, built by daveux here. The primary reason I chose it was a more 1:1 with the System.Net namespace to use one project for both Windows and Windows Phone (or Silverlight or whatever until the Portable Library Projects bake into VS 2010 SP1).

I'm in the process of determining if I want to use CodePlex or BitBucket and I'm really torn. Bitbucket has awesome small features like merging usernames and a slightly better issue tracker (2 extra fields whee) with external services support as well like being able to track things via Google Analytics. I may just release to both initially just to see which gets picked up or used more often but that may bite me in the ass.

As of today the app works connecting to the very first server created in the settings factory. The very first thing I want to get done after this is use real settings stored in isolated storage and build the UI to change it. I'd like to do that before taking off the reigns and publishing for real but I'll see how that goes.

I could try to explain the UI but screenshots would serve a better purpose of landscape and portait mode respectively: 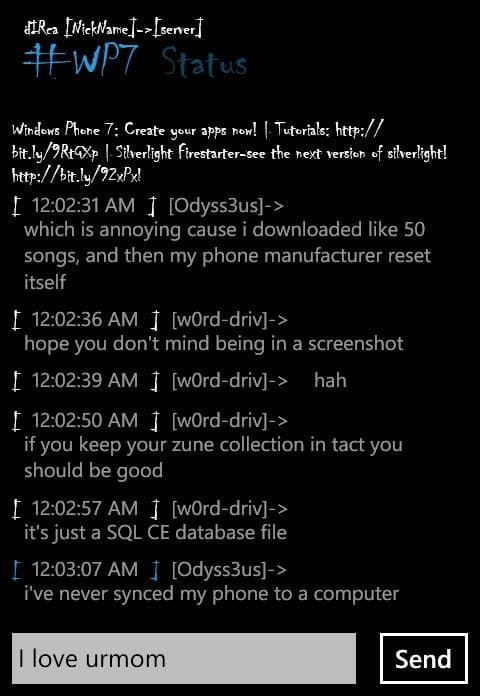 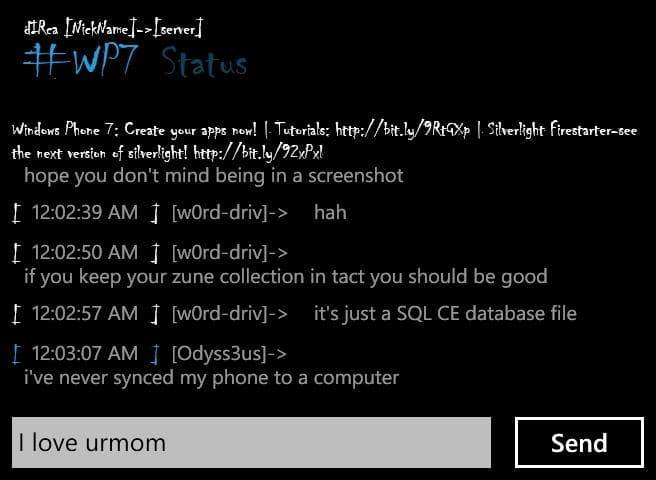 I'm using the excellent Chillen font, one I've dubbed the new Comic Sans so we'll see how long that sticks. At least initially I hope to have multiple servers as pages with their own pivot controls for channel and query messages. DCC and CTCP commands aren't supported at all and I don't really parse channel events yet except topic changes but things are slowly coming together now that the networking infrastructure is somewhat stable.

I am looking for testers but there's some pretty big caveats. You need developer sideloading access to your phone, either through ChevronWP7 or normal marketplace unlock. I do not have any clue what will happen to this codebase after NoDo hits but I believe native support should still be possible. That puts me in a rush to try to finish something to at least incubate as people use it and luckily I could work on a WPF/SL port reusing almost all of the code.

I primarily posted this just to have a place to link to those screenshots for posterity since I couldn't seem to figure out how to store local images in codeplex or bitbucket. My n00bness is showing...